There are martial arts organizations in the world which cater to just the very elite in the martial arts. They seldom advertise and acceptance into their inner circle in most often impossible for the average martial artist. These types of organizations often take a low profile and are not well known because of their uncommon nature. One such organization which was formed in America in May of 1993, not only has the distinction of being America’s FIRST grandmasters council, but also one of the largest and most elite in the world. It is called the WORLD HEAD OF FAMILY SOKESHIP COUNCIL.

The brainchild of its Founder, Grandmaster Frank E. Sanchez of Guam. The WORLD HEAD OF FAMILY SOKESHIP COUNCIL is composed solely of 9th and 10th dan grandmasters and their equivalents. At the present time the Council has over 160 members worldwide of every conceivable martial arts style and origin. Their list of members reads like a virtual “Who’s Who” of the martial arts world. Unlike other organizations, there are no membership dues. The WORLD HEAD OF FAMILY SOKESHIP COUNCIL grants membership solely by invitation or sponsorship only.

The main purpose of the Council’s focus is to bring communication between the different systems through its grandmasters and proliferate the growth of the martial arts through its programs. Programs such as its yearly International Hall of Fame which honors martial artists yearly for their accomplishments; its martial arts college; and its seminar program designed to expose martial artists to the teachings of the grandmasters.
For more information on the Council and its programs, you can write to its International Headquarters Jacksonville Florida at: 6035 Ft. Caroline Road, Suite 22, Jacksonville, Florida U.S.A. 32277 Fax (904) 744-4625 whfsc@Bushido.org. 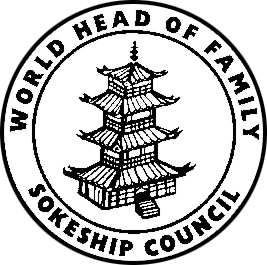